This is a rant.

I have a number of credit cards, use them carefully, always pay more than the minimum, and ahead of the due date.
I've had one in particular for several decades and it has a fairly high "line" that they've voluntarily raised on several occasions.
[It's with one of the big four national banks - but not Wells Fargo.]
I share that one with my [adult] youngest son.
He has his own physical card and is responsible.
He and uses it basically as an emergency backup, repaying me as he's able.
It keeps him from over extending on his own cards and away from "payday loans" and similar trash lenders.

This evening he called me.
He's on a road trip, more than 1,000 miles from home, and his wallet - with the card has disappeared.
I did a quick check on-line and there are no unauthorized pending transactions.
Since he didn't have records with him, or computer access, I said that I would call, block the card, and order a new one.

I did make the call, but there was only a general number, and after going down the menu tree, I finally got to "lost or stolen credit cards."
This was at about 8:30 ET.
"Due to high volume there will be a delay...."
"Your call is important to us, please stay on the line..."
"Did you know, our other products..."
"We are still experiencing..."

For One hour, Forty three minutes, and Thirty five seconds!!!!

At which point, with my phone's battery being rather distressed, I hung up.
I went back on the net and found that, by ordering a replacement card, I could block his card.
But, I couldn't just order one for him.
The one in my wallet is now also blocked, both will be replaced, and even my online access to the account will be locked for twenty four hours.

I'm retired, after more than forty years in the financial industry.
We constantly worried about and worked on risk management.

It's ludicrous to me that there wasn't a way to go directly to a human being.

I don't know how much they save by their lack of service.

I do know that it's about to cost them my relationship.

Ours is on the east side of the house - sunshine in the morning, but shaded a bit later.
We've raised planters with both veggies and flowers, and lattice that supports the morning glories beyond.
It gives a fair amount of privacy without being solid and ugly.

"M" likes to go sit and read in the afternoon.

Our feeders are on the far edge and the birds don't seem to mind.
It's pleasant to watch them.
[Among others, we've about six male goldfinches that frequent the thistle and sunflower feeders.]

But seed attracts other creatures as well, including squirrels - three grays, two reds, and a black.
They mostly leave the feeders alone but vacuum the debris that the birds have dropped to the deck.
They're actually useful because the birds can be picky about the mix and scatter what they don't want at the moment.

However they don't always observe boundaries, and "M" is vey uncomfortable when they get too close.
We needed to find a non-lethal solution.
She now has an armed garden hose very close at hand.
It's much more fun than a water pistol and they've definitely gotten the idea that "human" equals "bath" equals "maybe lunch later."

At least most of the time.

We've more than a few varieties of wildlife in our vicinity.
Most of course are welcome, but a few can be bothersome.
Even though it's New Jersey, we've actually got a fairly dense bear population.

Our trash goes out to be picked up once per week - overnight on Wednesday for early morning removal on Thursday.
We've mandatory recycling, so that all goes in a barrel, and the actual "wet" garbage into a sturdy bag alongside.
There've been a number on instances of waking up to find the wet as a mess all over the road and lawn.
At first we blamed the bears but then realized that the true culprits were our local murder of crows.
They would come in, peck through the bag, and scatter the content.
[Bears typically grab the bag and run back to the woods.]

We didn't want to hurt them, but also didn't want to be getting up at 6:30 AM to put the wet out just in time for the actual pickup.
I came up with an idea, why not give them a bit of spice to go with their meal?
When the bag went out last night, it had a liberal dribble of siracha on the outside.
[The drawstrings were uncoated so that the trashman could lift it.]

We were awakened at about 6:45 this morning by the crows across the street.
They were having a very heated discussion among themselves.
They were absolutely not very happy.
But the bag was unopened, and no clean-up was needed.

Our property has two berry patches - "black cap" raspberries and true blackberries.
This year we harvested the raspberries for about three weeks in July.
It was a pretty good crop.

The blackberries started coming in at the beginning of August and were very abundant.
[Which semi makes up for the "not hot enough" lousy tomato year.]
During August we brought in at least five gallons, ate some, gave some away, and froze a lot.
[Frozen blackberries are a nice substitute for ice cubes in a Margareta.]
I thought we were done a week ago, but I wandered toward the patch today and still found about a pint of freshly ripened ones.
They'll probably make it into pancakes for tomorrow morning's breakfast.

It's been quite a while since I tarried here.
I've been busy - as always.
I'm still working, but on my own home, so just not getting paid for it.
Last years project was the master bedroom, this year it's a total rebuild of our kitchen.
The floor and ceiling are completed, and 95% of the walls.
The upgraded electricity [outlets and lighting] has been completed
The cabinets and counter on the far side are in, and the main side is under construction.
Today was grouting of the tiles behind the stove.
As soon as that finishes drying and gets a final cleaning, the hood goes back up and the stove goes back into place.

It's been an adventure.
As near as I can tell, the hose was built prior to 1860.
No surface is flat and nothing is plumb.
All cabinets are custom built and with custom dimensions.
It's more than just a challenge.

I've always been a bit frugal, with a "get it done with what you have," attitude.
[Although I will admit that I have a lot, especially when discussing tools of any kind.]

Our original forecast here was for 12 to 15 inches of snow this weekend.
Snow removal has always been done by me, and with a shovel.
Yesterday I finally "bit the bullet" and bought a quality gas powered snow blower.
Now of course my forecast says that we may not even see four inches of snow.

Reluctantly, I have to admit to my age.
Other snowfalls will happen.
Heart attacks can happen.
Bad backs and shoulder aches do happen.
I'll get my money's worth.
... and in the mean time, I have peace of mind.

I came off the road after dark last night.
As I got out of my pickup, I could hear a frog croaking at the back of the yard.
That's one of the nice things about country life.
Nicer too was that he didn't continue all night and yes I was able to get some sleep with the windows open.

Three fence posts - out front near the road.
That's the high side of my property. - It drops roughly ten feet front to back over a 190 foot distance.
The interesting part was that I struck water in all three holes at about a depth of one foot.
The land on the other side of the road is higher, but only by a couple of feet.
It had rained the night before, but not that much, it's apparently a high water table.
My basement is dry, so I'm not too concerned.
What's amusing is that I have a 160 plus foot deep well.
It looks like I will not have to worry about it going dry this year.
Hey

sawguy, I'll send you some if you'll pay for the freight costs.

In many parts of the NYC metro area, landscapers have to pay to dump wood chips.
Therefore, in those areas, if they happen to find a homeowner that's looking for chips to use as mulch, they are only to happy to oblige, and for free.
A friend of mine was one of those homeowners.
The other day, she received about seven cubic yards, in a great big pile, in the middle of her driveway.

The cart holds about 6 1/2 cubic feet
That works out to about 29 cart loads.
Somehow one of us got the, "Load the cart and pull it [uphill] detail," and the other got to use the rake to spread them around.

We were sort of busy. 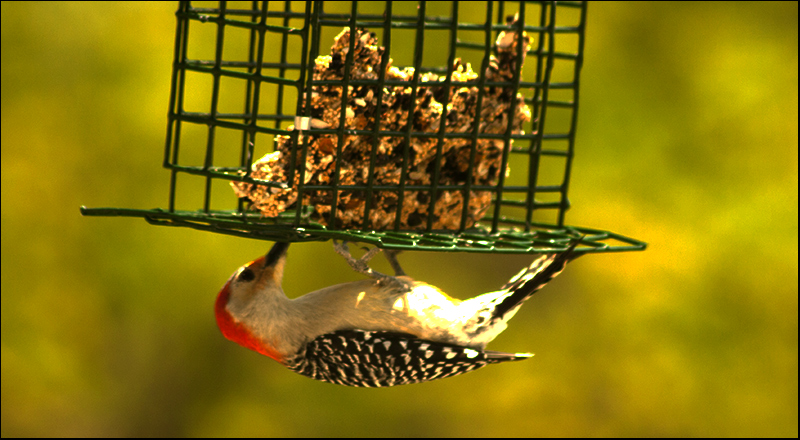 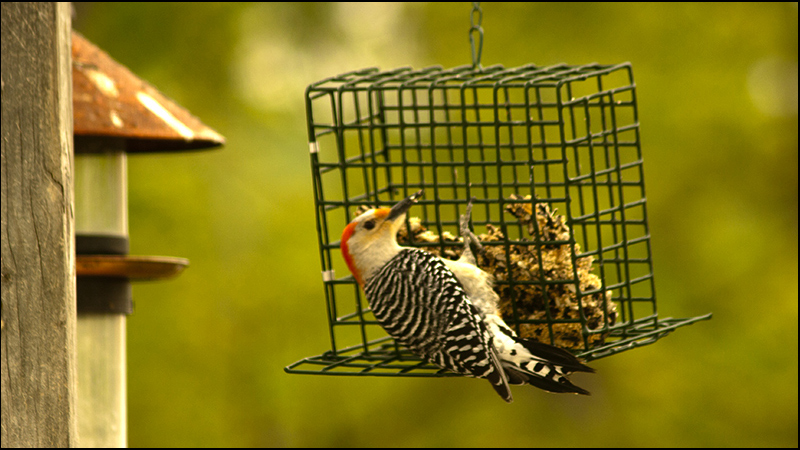 I think this may be a male Red-Bellied Woodpecker.
He's been a regular visitor to my feeder for a couple of weeks.
What's your opinion